Have Smartphones Changed Our Lives for the Better?

The smartphone has fundamentally transformed our lives.

It has democratized the internet, allowing for unlimited access to all of human knowledge. It’s created entire new opportunities for businesses that couldn’t exist otherwise, such as Uber. And it’s been a powerful force for societal change.

As one of the last members of a generation that can remember what life was like before every 4th grader was holding an iPhone X (56% of children aged between eight and 12 have a phone), I’ve seen both ends of the spectrum.

The smartphone, like social media and many other things you can access with it, is a tool. Like all tools, it can lead to both good and bad outcomes.

It just happens to be among the most powerful tools ever created.

But has it changed our lives for the better?

When my family was recently packing for a trip, we were planning to take our physical camera. After some reflection, we decided against it; after all, our smartphones have better cameras anyway.

Consider how insane that is.

Less than 20 years ago, people used to have a suitcase full of accessories - a cellphone, a camera, a Walkman, a newspaper, a flashlight, a map, a beeper, a calculator, a ruler, a compass, a notebook, a wallet, and a GameCube - that now all fit in a device thinner than a chocolate bar and more powerful than the supercomputer that sent Neil Armstrong to the moon.

You can install hundreds of additional applications to unlock even more utilities from hailing a taxi to making a reservation at a restaurant.

And 7.26 Billion people in the world (91%) walk around with one of these devices every day about a decade after they were first released.

That’s over 3 times faster adoption than Color TV and electricity.

Consider what those staggering statistics mean for our society.

Everyone has a camera constantly with them. We can document everything about our lives. My parents have barely any photos from their childhoods, but my younger siblings will have thousands.

When everyone is a photographer, people around the world know about important discoveries, comments, releases, shootings, and invasions the second they happen. 98% of Generation Z owns a smartphone.

This can be a force for change, such as with the outpouring of support for BLM following the filming of George Floyd. It can alter the outcome of elections (as seen in 2012).

And despite discussion about filter bubbles and alternative facts, smartphones have arguably led to a better educated population in terms of major current events and issues.

Whenever technologies are implemented at scale, tiny features can have a massive impact.

It’s nearly impossible to get truly lost with a map constantly at your disposal. And we’re perpetually connected for communications. Always.

I can, at any time, speak to anyone as if they were in the same room. I can send a letter in seconds.

I found this particularly amusing when recently watching the film “Master and Commander,” in which a British Warship during the Napoleonic Wars had to turn around to catch another ship in order to give them a piece of information they had discovered. Not quite as simple as sending a text.

The smartphone has enabled my mom to stay in touch with her friends from college, chatting almost every day despite only seeing each other in person once a year.

Cellphones and computers have been around long before the advent of the modern smartphone. What makes the smartphone particularly impactful is that it’s always with you. 74% of Americans dislike leaving home without their smartphones.

This is fantastic for work. Regardless of your field, you likely benefit from the ability to communicate wherever, whenever. And for medical professionals in particular, it means an ability to always be available to patients when they need you most.

But there are also major downsides to this immediate communication.

It’s led to a world where societal expectations dictate fast response times. I remember reading an interesting post earlier this year about normalizing not apologizing for late email responses.

We reach out to people expecting them to drop whatever they’re doing and respond to us within minutes. For those of us who are more courteous, we’ll give them a few hours.

I feel mixed about this. On one hand, I believe a swift response does indicate commitment and respect. I have personally been frustrated with people who take days to respond (or even more “egregious,” triggering a read receipt and then not responding).

But I also think these expectations can lead to diminished personal time, and an unhealthy balance between work and everything else.

Notably, these are relatively new problems as well. Not long ago, it was accepted that if you weren’t home, you couldn’t be easily reached. Was that better? Probably not, but it’s certainly not the world we live in anymore.

An anecdote follows that demonstrates this dichotomy between the benefits of carrying around a device with you everywhere, and the drawbacks.

My family has used apps like FindMy and Life360 to keep track of where we are. These applications are amazing for safety. Parents can see where their children are going, if they’re speeding, and respond immediately if they’re in danger or an accident occurs.

But services enabled by the existence of smartphones also remove any semblance of privacy for users. Not only from their family or friends (a freedom younger generations simply no longer have), but from technology companies and potentially nefarious third parties.

Some of this data is used to improve products and personalize your experience. Often, it’s sold to the highest bidder or used internally.

There’s an argument I’ve seen used on the web all the time regarding privacy on smartphones: “Why should I care about cookies, cross-app trackers, and the like? I’ve got nothing to hide.” Sometimes, you just want that increased privacy regardless.

In many ways, smartphones are about convenience. They make our lives so much easier in some respects that it’s easy to disregard the stress and pressure that they subliminally provide.

Answer me this: When’s the last time you were bored. Truly bored, with nothing to do?

It’s been a while, right?

Because whenever you feel even an inkling or understimulation, you whip out that iPhone or Android and boom! Dopamine rush.

How you get that will probably differ based on your age and where you live.

Maybe it’s Facebook, or WeChat, or Instagram, or TikTok. Maybe it’s Twitch or YouTube. Maybe it’s a book, or a game, or a podcast, or a movie. Maybe it’s your personally curated collection of RSS feeds.

It doesn’t really matter. Because with a smartphone, you can literally never be bored. If a smartphone is really, really, good at something, it’s portable entertainment.

This is good, right? Nobody likes being bored. 64% of Americans use their phone on the toilet.

That entertainment can potentially be educational, bettering yourself in the process. 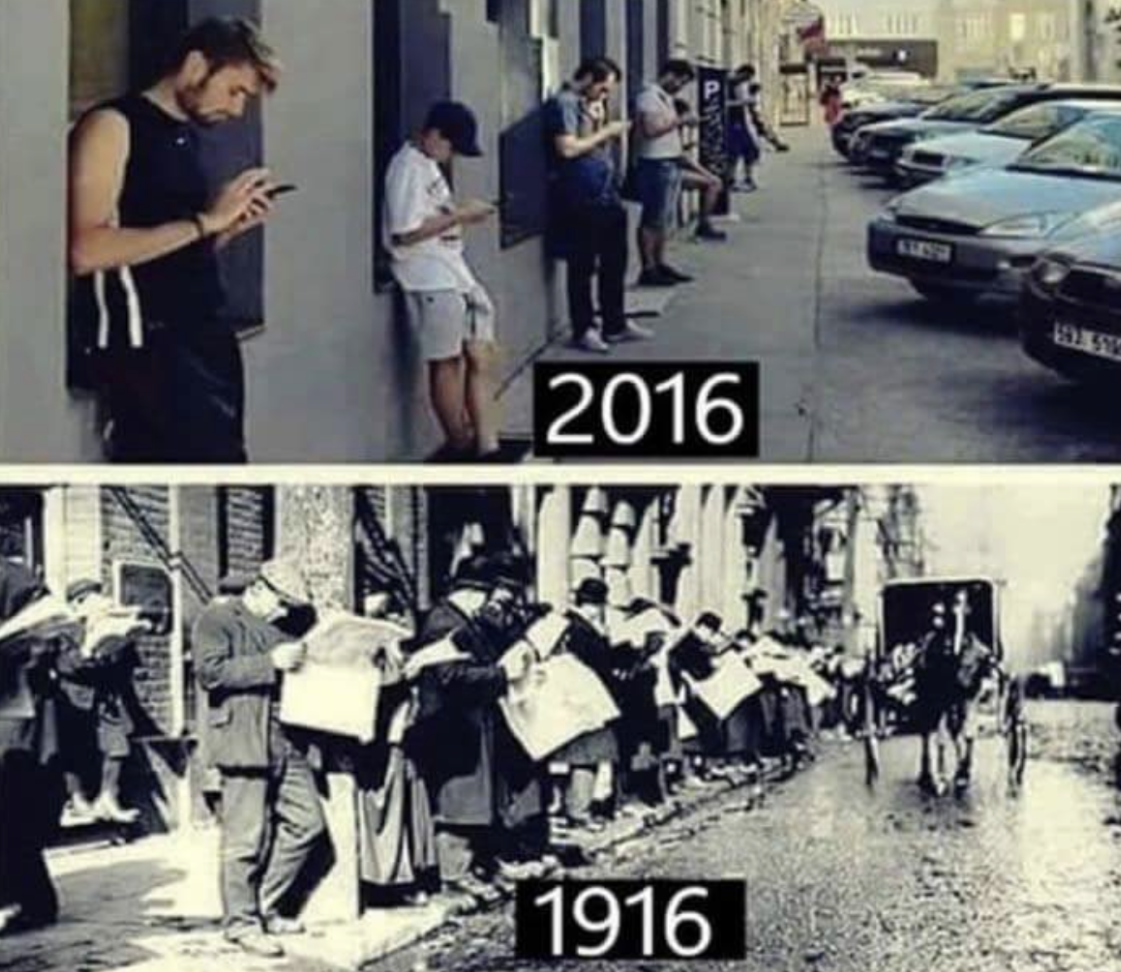 I’m not here to decry smartphones or argue they’re replacing human contact and keeping people from going outside and touching grass. There are many other technologies at fault there.

But, I think there’s value to being bored. For me, that’s when the true introspection and deep thinking can best occur.

And there’s no disputing that smartphones are eating up our time.

The average American spends almost 3 hours a day on their phone. They check it 344 times.

It’s hard to tell what the ramifications of that will be down the road. We’re only beginning to grasp the enormity of how smartphones have warped our lives.

Earlier I spoke about how smartphones replaced a suitcase full of accessories - so it’s reasonable that a device that can accomplish all of those tasks would use up a decent chunk of time.

I want to emphasize, I don’t necessarily view this as a bad thing. We use smartphones religiously because they provide value to our lives.

That value just comes at the cost of massive sections of our time and attention.

The smartphone is here to stay (until it is eventually superseded by an even more powerful device, perhaps an implant or AR glasses).

This isn’t something we can just put back in the pithos.

So, to return to my original query. Have smartphones been a net positive for society?

In my view, that’s an easy yes.

Despite concerns over usage and privacy, we are extremely lucky to live in a time in which such superpowers are commonplace.

Let’s use them to better our lives, and those of others.

Get my blog posts right in your inbox, plus a peek at what I'm working on! I love sharing tech articles and videos a curious person may find fascinating.